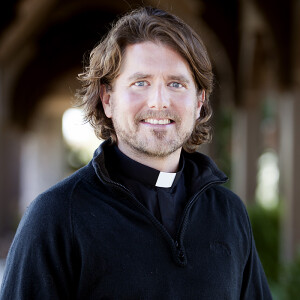 Greg spent the majority of his childhood in Japan and Taiwan, returning to the States as a teenager and attending St. Andrew’s Episcopal Prep School in Bethesda, MD. His parents, dyed in the wool Episcopalians, raised him in this tradition but as an act of teenage rebellion, Greg became a Presbyterian. He moved to NC to attend UNC-Greensboro and married his wife Beth a week after graduation in 1994. They moved to Uganda, East Africa to serve a number of years as missionaries then returned to NC to begin studies at Reformed Theological Seminary and serve as Director of College Ministries for a Presbyterian Church. After graduation and ordination in the Presbyterian Church in 2002, Greg planted a church in downtown Greensboro and served as Senior Pastor for almost nine years. Subsequently Greg and Beth served as Co-Executive Directors of Selah Spiritual Formation, a non-profit focused on spiritual direction and retreat leadership. In 2011, Greg was invited to join the staff at Holy Trinity. Through this process, he returned to the Episcopal fold of his youth and was ordained as a priest in 2016. Greg and Beth have three sons.