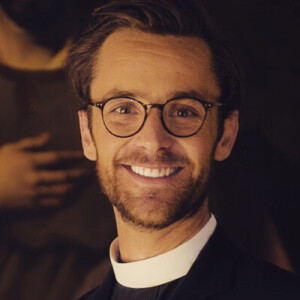 Originally from Boston, Nathan was raised in Wilmington, NC with his twin sister. He is a 2004 graduate of the University of North Carolina at Chapel Hill with a BA in Philosophy and a BA in Political Science, and a 2008 graduate of Yale University with the Masters of Divinity degree. After finishing Divinity School, Nathan served for 2 years at St. Mary’s Episcopal Church in Kinston, NC. He moved to Greensboro in 2010 to become Chaplain for Canterbury School, where he served until joining Holy Trinity full time in 2016. Nathan and his wife Kaitlin enjoy live music, good books, and spending time with their sons, Beckett and Oliver, and English Bulldog, Dan.