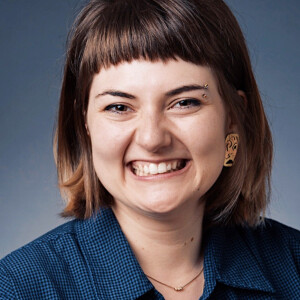 Genevieve (Jenny) Campbell considers herself equal parts Virginian and Texan. Born in Fredericksburg, VA, she grew up attending Episcopal churches and St. George’s summer camp in the Diocese of Virginia. During her high school years, she was a dedicated acolyte and youth group member of St. Paul’s Episcopal in Waco, TX. In 2012, she moved back to Virginia where she remained involved in campus ministry and spent two summers as a St. George’s camp counselor. She received majors in Studio Art and Spanish from the University of Virginia in 2016. After graduating, Jenny moved to Austin, Texas where she served as Director for Youth Ministry at St. David’s Episcopal for five years. She spends her free time in parks and on trails with her dog Bea, doing yoga, watching movies, going to concerts, and drawing. She is passionate about creating inclusive spaces for teenagers of all backgrounds to explore their faith and deepen their relationship with the larger Episcopal church.